Jessup 2021/2022 – Report: Diving into International Law, online and in person 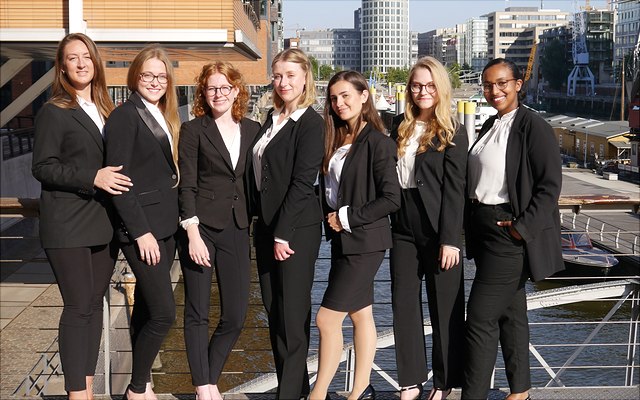 Participating in the Philip C. Jessup Moot Court Competition 2021/2022 was as much an adventure as it was a learning experience. Writing the memorial in person, researching until our computers would not work anymore, and preparing for the National Rounds both in person and online, the global pandemic still on our minds. During the following months, through work, sweat and tears, we quickly became one team. This year’s competition was a special hybrid, online and in person, Jessup experience.

After the first brunch get-together, between nervousness and cake, we came to know each other for the first time. Right from the beginning our all-women’s team formed a strong bond. After the first speaking exercise from our coaches, we were not as nervous anymore and spend the day laughing, talking, and looking forward to the release of the Compromis.

In August, we prepared ourselves for very exciting following months. The decision of whether the German National Rounds of 2022 were being held in person in Heidelberg or online was still to follow and until the final decision was made, our team spend the time hoping for the pandemic to allow us to travel. Due to the uncertainty of the situation and the ongoing health concerns worldwide, at the end of August, the decision was made to hold the International Rounds online. Although it was sad news at first, our hope was even more to have the German National Rounds in person.

During our first official Jessup meeting, the coaches introduced us to the basic skills and know-how we needed to start out our Jessup experience. We completed our first tasks and did various exercises for our coaches to see and decide who was more likely to represent the Applicant and who was more likely to represent the Respondent during the competition. Shortly after, the Compromis was released, and we, the Mooties, and our coaches gathered around a single computer, waiting for the Compromis to be available for download on the ILSA webpage. So, our adventure began.

October 2021 – Getting to know the Compromis and the claims

The first step was to find sponsors and judges for our mock pleadings. After countless emails and telephone calls, we reached contacts we never had partnered with before and learned that our team would give it our very best. In the weeks that followed we became acquainted with the claims we were going to represent. The weekly meetings with coaches and claim partners started out with ideas and brainstorming on what exactly was required of us in this year’s competition. What questions were there to answer and what topic in international law do we have to focus on? Was the traffic accident important? Or the fact that the wife of the Ravarian Ambassador had killed an Antaran citizen? What does a botnet mean and what is Pano? All these questions we tried to answer. Following very spirited discussions and thinking we finally had the right approach, some other idea crossed our minds and we started to rethink all over again. A process that was fun but also frustrating at times, trying to find our way through the jungle of our Compromis.

Working days started to become longer as we tried to make something like a Memorial of our scribbles. Questions started to become answers, but we were still unsure on how to structure our claims. Words turned to pages, and we almost lost ourselves in diplomatic law and still trying to figure out how exactly a botnet worked. Visiting the university’s library and spending the whole day in front of our computers eating Ramen noodles, we learned how many hours of work and dedication a Memorial requires. The office was full of empty teacups and empty bags of Ramen. Occasional naps on the office couches became normal and the stress of our laptops deleting progress kept us awake at night.

December 2021 – Memo deadline and a toast

Tension was high when the first submission of the memorial came closer. Nights were short, working days long. Computers were used to the breaking point, last discussions were held. Loud dance music and Taylor Swift kept our spirits high in the office, as we gave our best to finish the memo as a team. When Christmas came around, we had a couple of days off. It felt strange to not leave for the office like every single day for the past three months. But the Christmas vacation gave us the strength we needed for the coming weeks.

Spending the first days back in the office, trying to give our memo the final touch, we were equally nervous and frightened when the time came to submit the final version of our about 140 pages long work. Countless of working hours, sweat and tears had gone into every single word on every finished page, when we finally clicked the button to send our memo to the ILSA. Late night dancing and laughing helped us to loosen up and put the pressure of the written memorial phase behind us.

As the Nationals came closer, we tried to improve our presentation as much as we could and some of us Mooties even started to present without any notes or folders in front of judges, sponsors and alumni. International law quizzes were answered, last minute information was gathered, and the technological set-up was ordered. Our Coaches invested time and energy to both criticize and reassure us at the same time.

Although the decision was made to hold the rounds online in Germany, we rented out our very own B&B, to have at least some kind of travel feeling and team spirit. Many gift bags were received and what we were supposed to get in Heidelberg was shipped to us to enjoy, despite the pandemical and political situation. When the Rounds started, memos were read in jumpsuits and cold drinks and pizza kept us company. The following two days of pleading were over as fast as they came. The matches were a lot of fun. We were very proud of what we had achieved, although a bit of disappointment crossed our minds when we did not advance to the International Rounds. Even more we celebrated our memorial winning the runner-up award for the best written memorial. When the final was watched, the suitcases packed and the lights switched off, our Jessup pleading rounds officially came to an end.

When the competition was officially over for us, meeting up with coaches and team without discussing International Law, claims or pleading questions almost felt strange. We were happy, relieved, and sad at the same time. The Jessup 2022, online and in person, brought us a lot of experience in International Law, as well as personally. We know each other better now, have found friends for life and memories we will talk about in ten years’ time from now.